Shoreline Yacht Club is excited to be hosting our first PHRF event of 2011!  Rites of Spring is a great way to kick off the sailing season so come join us.  Below is a flyer with information, you can also get more details from the SYC website at www.shorelineyachtclub.com 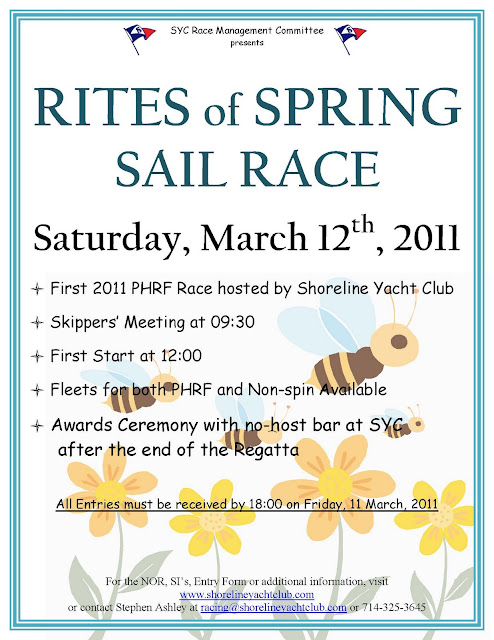 www.shorelineyachtclub.com
Posted by Shoreline Yacht Club Race News at 6:27 AM No comments:

There and Back Avalon Regatta

This past weekend Shoreline Yacht Club hosted the "There and Back Avalon Regatta".  The regatta is a two race series, featuring a race from Long Beach to Avalon on Saturday, February 5th and then a pursuit race from Avalon back to Long Beach on Sunday, February 6th.

Many thanks to the following skippers for their participation:

In a stark contrast to last year when we had strong winds, Saturday's race was run in light winds.  In fact so light that none of the boats finished within the prescribed time limit although at least two fought to the very end to try and get over the line in time.  After a good dinner at Antonio's in Avalon all of the competitors retired to dream of better winds for Sunday's race.

The start of Sunday's race which featured a pursuit start featured good winds in the 10-12 knot range and had all of the competitors thinking that maybe we had a good day of sailing ahead of us.  It was not to be.  After about an hour, the winds dropped to almost nothing and we were even radioed from someone in the hills above Avalon that they could see flat water all the way to Long Beach.  Most of the competitors finally gave up and fired up the engines to hopefully catch part of the Super Bowl back at the Club.  As a final tease from the wind gods, we did get a nice burst of wind about an hour out of Long Beach with gusts hitting 15 knots - too little too late for most of the fleet.

Congratulations to Paul Margis and his crew on "Indigo" for not only sticking it out but winning the race and taking the overall win for the Regatta.  Additional congratulations to Chuck Waltman of "Silver Fox" for single-handing his boat and being the other finisher.

Lastly, I want to thank Ray Wilson for his contribution as the PRO as well as competing on his own boat.  His attention to detail and overall coordination made the event come off great for all concerned.

Next Shoreline event - Rites of Spring, Saturday, March 12th.  NOR, SI's and Entry Forms will be available on the website www.shorelineyachtclub.com in the next few days.
Posted by Shoreline Yacht Club Race News at 3:40 PM No comments: