On Saturday, August 11th, Shoreline hosted the Franklin D. Ross Memorial Platform to Queen Mary Race for singlehanded and doublehanded sailors.  For the people on the race committee and the rest of the population, it was a beautiful day but the competitors would have hoped for a bit more wind.

Nineteen (19) boats registered and seventeen (17) made the start line - the other two being sidelined by some of the normal mechanical issues that can plaque boats.  The light winds claimed five more competitors from the non-spinnaker fleet leaving twelve boats to finish the race.

Congratulations to the following winners in their respective classes:

To honor Frank Ross, a long time member and singlehanded racer, the Pacific Singlehanded Sailors Association (PSSA) created a perpetual trophy in Frank's name for the overall winner.  Congratulations to Taylor Grant on eXigent for taking this honor with an elapsed time of 5 hours, 6 minutes and 6 seconds giving him a corrected time of 4 hours, 41 minutes and 15 seconds. 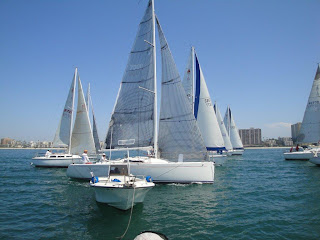 Complete results are under the PHRF Race tab.

Final thanks to the race committee of Steve Falberg, Steve Cooper, Dee Ross, John Sears and Mark Holmes
Posted by Race Chair at 6:13 AM